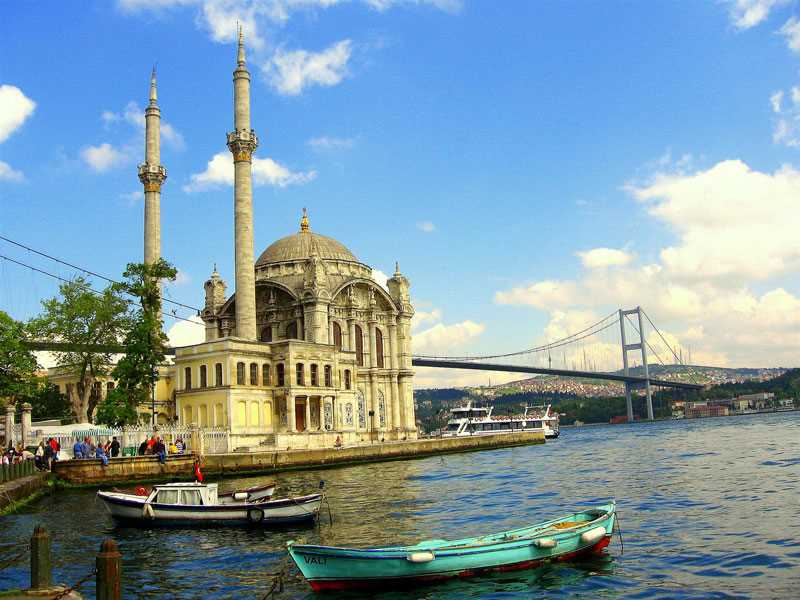 One of the most beautiful Ottoman mosques of the 19th century. The Orta Koi Mosque, also known as the Great Mosque of Müdidiye Camii, is situated on the banks of the Bosphorus Strait in the Ortakoy region of Beşiktaş in the European section of Istanbul.

The mosque was designed and built by architect Nigoğayos Balyan in 1853 and ordered by Sultan Abdul Majid.

The complex is built in Baroque style and consists of two prayer sections, a dedicated section for women and a dedicated department for men and women. The mosque contains two minarets, a mihrab of mosaics and marble, and a dome covering the women's section, based on the walls and adorned with Ottoman pottery. The walls of the complex are curved inside and have reinforcement supports to increase their strength. The pulpit is built of marble coated with Sumaki and is accessed by a spiral staircase.

In 1894 the mosque was exposed to a powerful earthquake which caused the destruction of some of its sections. In 1984, a large fire was also caused, which caused great damage to the mosque and was restored and restored to its former glory.

In recent years, the mosque has been restored, especially the inscriptions painted by Baroque and Amper, located in the inner section of the mosque.