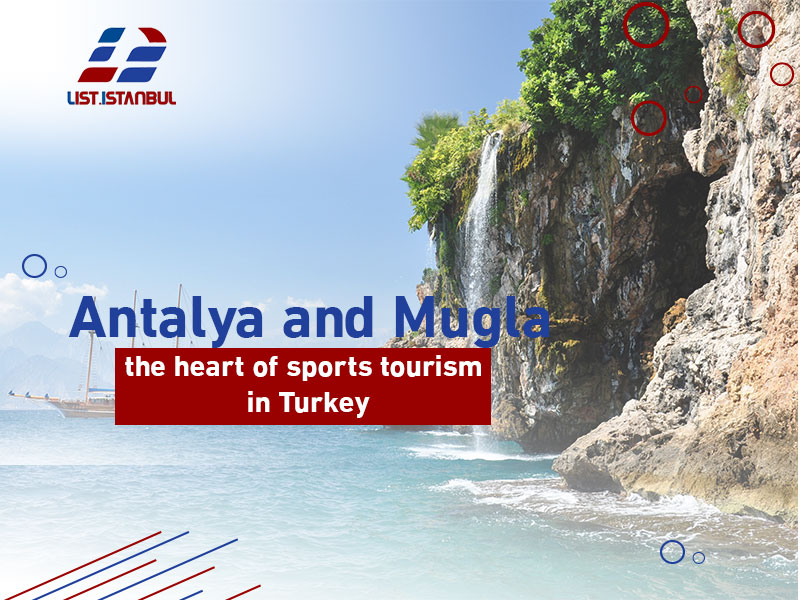 Various activities and events influenced the diaries of the Turkish states of Mugla and Antalya in 2019, and strengthened their position as the preferred destination for millions of visitors, especially those looking for sports tourism.

They are considered one of the important tourist destinations in Turkey

They enjoy historical and cultural beauty, and throughout the year they host many sports activities

* Yaoz Gurhan, Deputy Director of the Department of Youth and Sports, Antalya:

- More than two thousand camps were established after the end of football tournaments, and 150,000 athletes and volunteers visited the city

* Omar Elman, Director of the Department of Youth and Sports of Mugla:

- The state, which is a registered mark in the tourism sector, is a major attraction for sports tourism

Various activities and events influenced the diaries of the Turkish states of Mugla and Antalya in 2019, and strengthened their position as the preferred destination for millions of visitors, especially those looking for sports tourism.

A picturesque green nature, rich cultural balance, blue seas, and virgin bays .. A beauty combination that makes the two states a registered mark of privacy that made them advanced in the ranking of favorite cities for athletes and tourists in general.

The city of Antalya (South), which has emerged in general as one of the important destinations for global tourism, has arrived in 2019 thanks to its climate and natural beauty, to advanced centers in the ranking of cities that are preferred by athletes and tourists.

The city has achieved record numbers throughout the year in terms of numbers of tourists, and it has become a well-known name in various types of tourism, such as sea tourism, sand, sun, as well as sports tourism.

It also attracts attention to it with its beaches and nature, its historical and cultural values, health centers, and other conferences, as well as the facilities that distinguish it.

The city hosted, throughout the year, athletic heroes in different sports branches, local or from Europe, the Balkans and different countries around the world. Thousands of athletes, coaches and sports fans, were present in Antalya by participating in many local and international events.

Among these sports events is the 2019 International Golf Open Championship, which was held in the city under the auspices of Turkish Airlines, last November.

This four-day championship at a tourist center brought together the best golfers and their fans around the world.

Antalya is also preparing to host local and foreign clubs during the football league period, and the number of camps that will be organized in the city in various sports branches is expected to reach 3 thousand camps.

Likewise, throughout 2019, the city of Mugla (southwest) witnessed the organization of many different sporting activities and events.

Those responsible for state affairs aim to increase sports activities to contribute to the region's economy.

Mugla, which is also one of the most popular tourist centers in Turkey, is also a camp center for rafting teams and canoes, as it hosts many of its districts such as Bodrum, Marmis, Fethiye, many and various races for yachts and sailboats.

In recent years, Bodrum has regularly hosted the International Sailing Regatta, with the participation of nearly 500 people from different parts of the world, in events that constitute competition and an opportunity to discover the city, which has a positive impact on its economy.

Also, the region is considered a suitable environment for fans of skydiving that enables them to see very beautiful landscapes, and this annual sport festival is held in which about 200 paratroopers from 70 countries around the world participate.

Yaoz Gurhan, Deputy Director of the Department of Youth and Sports in Antalya, said in an interview with Anatolia, that sport and tourism are not alternatives, but are complementary to each other.

Gorhan stressed the importance of the economic contribution of sports tourism, noting that the sport industry around the world generates approximately 600 billion dollars annually.

He pointed out that sports tourism constitutes 10 percent of tourism income around the world, and that it grows annually at a rate of 14 percent, stressing the great potential enjoyed by Antalya to practice sports tourism such as its climate and geographical composition.

He continued, "There is no doubt that sporting events, which have a place among international activities, are considered one of the fastest growing and growing activities within the activities tourism."

He pointed out that the city of Antalya witnessed in 2019 the organization of 65 sporting events at the local and international levels, and held more than two thousand camps during the period of disruption of football patrols, while visited the city thanks to all these activities, about 150 thousand athletes and volunteer sports.

He added: "The city also has 934 sports facilities with international standards, and this comes in light of the Ministry of Youth and Sports keenness to encourage sport and spread it among young people in particular to empty their energies and make the best use of them."

A center for sports tourism

For his part, Omar Elman, Director of Youth and Sports Department in Mugla, said, "The state has a suitable geographical nature to carry out all kinds of sports activities and events, and it is considered a registered mark in the tourism sector, and a major attraction for sports tourism."

He stated in an interview with Anatolia, that the state possesses the longest coastal strip in all of Turkey, reaching 1484 km, considering that it is one of the leading cities in the field of sports tourism.

He pointed out that "the city is very rich in sports tourism, and ducks Its picturesque sale, with its deep blue seas, is suitable for all types of sporting activities. And we seek to make big investments to make this city better than it is now, especially in the field of sports tourism. "