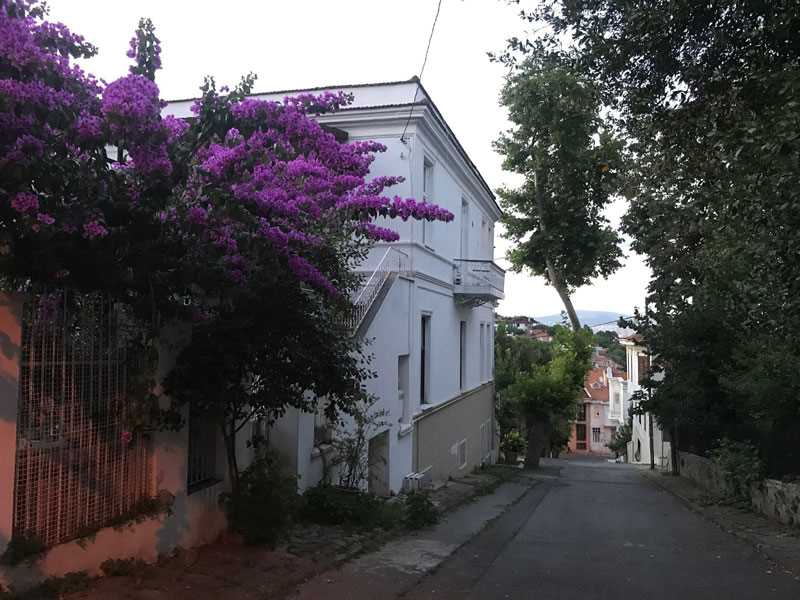 The second largest island of the princes in Istanbul. It has an area of ​​2.4 km2. Located amid the islands in the Sea of ​​Marmara. Contains 4 hills:

The port of Jam, known as the port of Santa Maria, is the largest harbor on the island.

The name of the saddle island is named after its shape, which resembles the saddle on the floor when viewed from a distance.

The saddle is one of Istanbul's most famous tourist attractions not only for its beauty and its wonderful weather, but also because of its archaeological features from different eras.

Saddle Island Like other islands, the use of automatic means of transport is prohibited. Bicycles and horse-drawn vehicles are used to roam the island.

One of the most famous celebrities who spent much of their lives on Saddle Island is the Turkish writer Hussein Rami, where the island had its own place. Woe to this writer was erected a statue in the garden opposite the marina. His house on the Mill Hill was turned into a museum.

Until the 19th century, the island of Saddle contained only a village of fishermen and three monasteries. In the same century and close dates, some of them were created a school of monks, which is the only high school for Orthodox, as well as the establishment of Allen School of Commerce, which is the first school to teach trade in Turkey as well as the Maritime School. These schools played an active role in the neighborhoods of the island. Where the rich of the Romans in Istanbul, especially after these developments, the establishment of palaces and housing and hosting shops, and with the increase of the number of Roman island, became a fun game on the island, and in 1887 was appointed Pope Yanni as the first mayor of the island on the saddle and in the same year was delivered line Telegraph to the island.

With the start of shipping trips, the Turks became more interested in this island. In those years, Abbas Helmi Pasha built a palace and named it, which led to the revival of the areas adjacent to the palace. In 1894, the island suffered a major loss as a result of a devastating earthquake. Before the effects of the earthquake disappeared from the island, Ambeleh, one of the island's most important places of recreation, was burned down. During the First World War, the island went through difficult days. In 1915, the Allen School of Business was closed. After a while, the school building was turned into a shelter for orphan girls.

During World War II, the Naval School was relocated to Mersin, southern Turkey, due to security conditions. In those years, both the students and staff who worked at the naval school left the island, leaving the island isolated. After the Second World War and with the return of the Naval School to the island in 1946, the island rejuvenated as before. After the events of 6-7 September 1955, which occurred in Istanbul, a large section of the Roman emigrated to Greece, which led to the loss of the island's vitality again. After 1980 and with the beginning of the population of Istanbul to migrate to the island lived a large population inflation and transformed the case of the rest of Istanbul to a residential area.

The opening of the medical clinic for tumors is one of the most important events on the island after the proclamation of the Republic of Turkey. The island became a source of hope for those suffering from tumors, and the island gained special status in the memory of the 20th century inhabitants of Istanbul. In 2005, a decision was made to shut down the oncology clinic on the island, Dafna. This is reminiscent of hundreds of people, such as the great poets Ihan Egha and Raafat Elgaz.

One of the most important historical monuments in the island of Saddle follows: