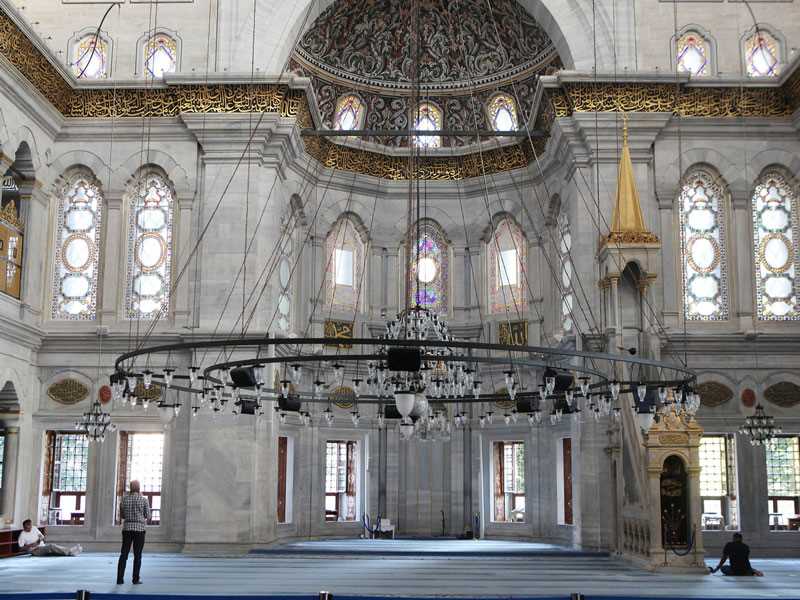 It is the first Ottoman building in the Baroque style (the style of building in the Baroque era that began in Italy in the late 16th century and dates back to the eighteenth century. The most important of which is the scarlet, golden and green), which is similar to the western architecture, combining both eastern and western Amurites. Thus, the Mosque of Nur Ottoman is a turning point in the history of Ottoman architecture.

The Ottoman Nur Mosque is located in the Chamberlain Tash Çemberlitaş district of the Fatih district in the European section of the city of Istanbul.

The Mosque was built in the form of a complex consisting of: Mosque, Tkiyeh (Restaurant for the Poor), Sultan's Mosque Şehsuvar Sultan, Mother of Sultan Osman III, School, Library, Water, Water Tanks, and Shops surrounding these buildings.

The Mosque of Nur Ottoman was established by order of the Ottoman Sultan Mahmood I in 1730 but died in 1754 before the completion of the mosque was completed, followed by Sultan Osman Thalat who completed the building of the mosque in 1755.

The mosque was built on the second hill of Istanbul's seven hills. It is accessed by a high and wide entrance. The prayer hall was built in the form of a square covered by a dome of 25.50 m. It is one of the largest domes used in the Ottoman mosques, inscribed with the verse "God is the light of the heavens and the earth". The rectangular courtyard, which precedes the prayer hall of the traditional Ottoman mosques, has been replaced by a polygonal courtyard covered with 14 domes and contains corridors. But it does not contain a fountain.

The interior is surrounded by high, paved corridors that extend along the eastern, western and northern walls. In addition, the mosque is characterized by the presence of Ottoman ornaments that decorate both the mihrab and the marble pulpit.

On the right side of the mosque is the Dar Al-Emara and on the Eastern Front there is the school. The school is a building with a gallery in the middle of its courtyard is a fountain. The Emirate building is a small courtyard, kitchen and restaurant. The school building and the emirate house are used today as a school to memorize the Koran.

The library of the complex is covered with a dome that sits on four pillars and supports the main dome of the dome halves. Several rooms were added to the library as well as a basement under the library. Noor Ottoman complex is built in a hanging, where there are a number of shops under the complex, and are distributed in three directions, and are still used today.