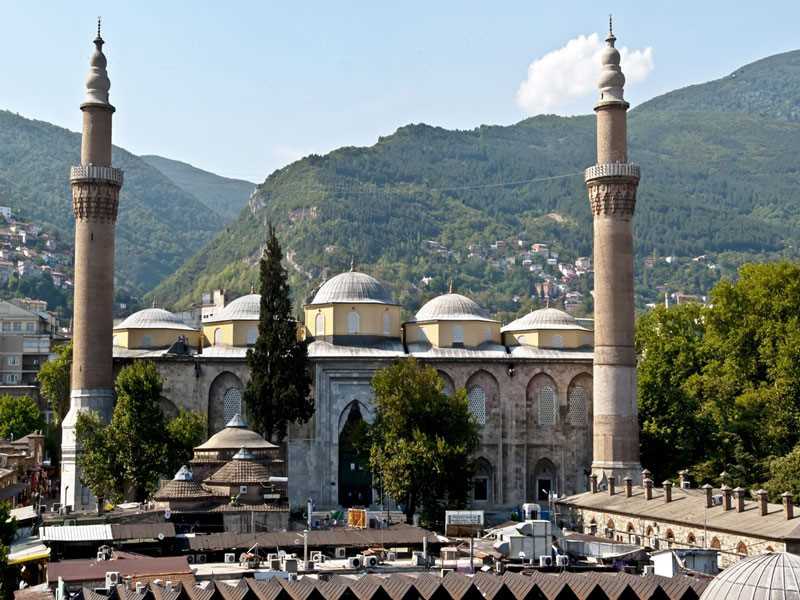 One of the finest surviving Ottoman manuscripts in Bursa is located in the heart of the city, close to its vital centers. It is the first large mosque built by the Ottomans.

The Great Mosque of Bursa was built between 1396 and 1400 AD under the supervision of the architect Ali Al-Najjar by Order of the Ottoman Sultan IV Beyazid I, where he pleaded with God and called for victory in the Battle of Niğbolu which was against the Crusaders and vowed to win the building of twenty universities in the country. Sultan Beyazid ordered his son the Emir to build a mosque with twenty tombs of unparalleled money from the Crusaders.

The mosque of Bursa al-Kabir extends over an area of ​​2215 m, divided into 4 sections covering each section 5 domes, and connecting them with a great fountain that is distinguished by the mosque from other bursa mosques. The story of this fountain dates back to the time when the Ottomans conquered the Sultan. Supervisors bought houses and squares in the place where they are suitable and compensate the residents with excellent amounts, but there is an old woman who refused to sell despite all the attempts and money because of her love for him and her memories. But this rejection will lead to a change in the size of the mosque and the shape as well. Therefore, the Sultan decided to go and ask for it himself, perhaps it is worth his coming. However, the stubborn old woman did not accept the request of the Sultan and his assistants. It was decided that the area of ​​this land, which is 65 square meters, would not be a place of prayer, and a place for ablutions should be set up and this fountain should be designed.

The silk bazaar, the underground closed market and many large markets are located on Bursa, just a few steps from the Grand Bourse Mosque.